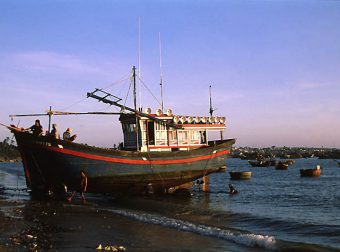 Interesting Facts About History of Phan Thiet and Mui Ne

If you are looking forward to visiting the charming fishing town of Mui Ne located in the area of Binh Thuan Province in Vietnam, you won’t need to do much research when it comes to your accommodation at one of the best resort to stay in mui ne – Bamboo Village Resort & Spa offers everything you could need.However, maybe it wouldn’t be bad for you to do some research on the history of this lovely town so that you’ll know more about it before your arrival.

There are various stories related to the origin of the name of Mui Ne.

One of the stories says that the name of the town Mui Ne comes from the words meaning “sheltered peninsula” and that it was given by the fishermen that were fishing in this area and were forced to hide from the sea storms in a cape (“Mui” means “cape” in Vietnamese), while “Ne” comes from their word for “hiding”.
Another story says that the youngest daughter of Cham King was also known as Ne, so when they built her the temple located in the cape, they decided to name the area Mui Ne.

The story of the oldest towers of Vietnam

The ancient towers overlooking Phan Thiet and worshiping Shiva can witness the turbulent history of Mui Ne. The story of these towers goes back in the era of Cham Kingdom and they are still known as Cham Towers. They were built during the occupation of the area by the mentioned kingdom in the 8th century.

It was the place where an important historical marriage was approved.

At the very beginning of 14th century, the area of Mui Ne was the place where the king, Tran Nhan Tong, approved the marriage of the princess, Huyen Chan, to the king of the Cham Kingdom, Jaya Sinhavarman III.

The province where the city of Phan Thiet and its suburb Mui Ne are situated was named Binh Thuan in the 17th century.

When Nguyen Phuc Chu, the lord that reigned southern Vietnam from the end of 17th century to the first quarter of the 18th century, occupied the area of the province in 1692, he made a decision to give this area its actual name, Binh Thuan Dinh.

Ho Chi Minh lived in Phan Thiet for a while.

The place in Phan Thiet that witnesses this fact is Duc Thanh School, where Nguyen Tat Thanh (that later became the president, Ho Chi Minh) taught for a year (from 1910 to 1911) and in this school tourists may be able to observe various items that were related to the life of Ho Chi Minh in this area, including his wooden bed, writing table, and ink-slab. Right beside the school, there is the Ho Chi Minh Museum, as well.

At the end of 1993, the French governor of Indochina declared the area of Phan Thiet (including Mui Ne) as a French administrative center.

In 1995, the area of Phan Thiet and Mui Ne was crowded by people willing to observe one of the most spectacular natural phenomena.

To be precise, October 24, 1995, was the date when a large number of people gathered in this area to witness the total solar eclipse because the scientists gave the announcement that the province of Binh Thuan was the only place in the entire country where they could see it. Many people state that this was the day when the tourism in Binh Thuan, and especially in Phan Thiet and Mui Ne started to blossom.This place has some amazing beach resorts also and one of them is Bamboo village beach resort & spa which is considered as the best resort to stay in mui ne by the tourists.

In 1999, Phan Thiet changed it status – from a town, it was upgraded to a city, with Mui Ne as its charming suburb.